… to ditch the carbs (as if you needed them): 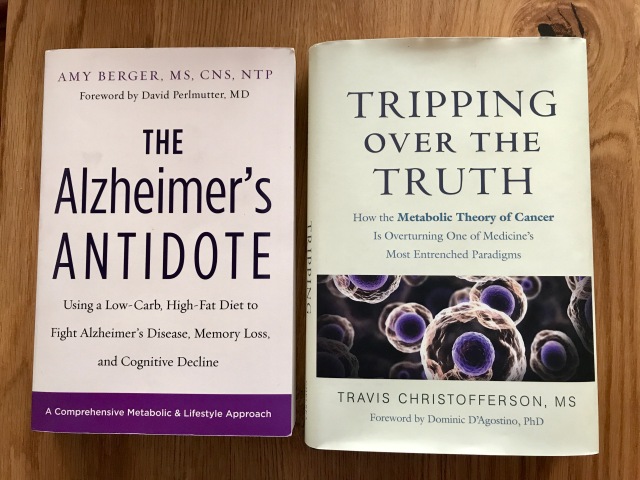 Amy Berger (she of the Tuit Nutrition blog)

undertakes a forensic examination of why poorly managed insulin and excessive carbohydrate intake damages the ability of brain cells to respire and may lead to Alzheimer’s and other lesser cognitive problems. Alzheimer’s is increasingly being referred to as “type 3 diabetes” and is becoming more prevalent as a disease.

Travis Christofferson considers the role of metabolism in the development of cancer. A surprisingly old idea that we seem to have forgotten about as we searched for cancer’s genetic secret… which doesn’t seem to exist. A book Cancer Research UK should read. Obesity doesn’t cause cancer… obesity and cancer are both consequence of poor insulin control and general metabolic damage caused by the over consumption of carbohydrates.

I’ll say it again, these are not new diseases and the answers are not new – Amy Berger cites TL Cleve from the 1950s – as I do. Travis refers to the Warbugh effect*, again described in the 1950s

We simply forgot the truth. Its time we remembered it. The healthy human condition relies on fat metabolism not carbohydrate metabolism. Thats why are genes are programmed to store many many many times more calories as saturated fat rather than glucose. Listen to the background music.